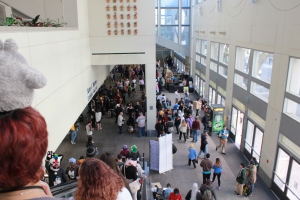 Hello again everyone! Neko’s Shiritori was back for more on our second appearance at SacAnime. Overall we had a blast in the heart of downtown Sacramento – in the convention center, the Sheraton Grand Hotel, and on an excursion to nearby Tank House BBQ & Bar for some piping hot smoked brisket, per Keoicorp’s recommendation. Of course, we can’t forget about the people responsible for taking care of us and making this possible in the first place: both Mr. David and Chris Wadley celebrated birthdays on the convention grounds (40 and 30 years of age, respectively) and we warmly wish both of them the very best.

Cosplayers and conventioneers alike turned out in force. Historically, the winter convention is the more popularly-attended of the two and this year was no exception. Through talks with the event staff, we learned of an existing problem with the autograph rooms and the queues extending out of the building, leaving people waiting out in the cold. Don’t worry though, the convention staff had a plan for that as stated later on in this post. 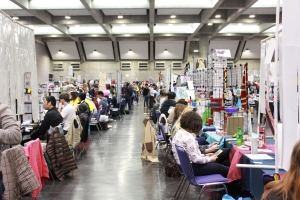 The combined dealer’s hall and artist alley is always a sight to behold. We stopped in again and exchanged pleasantries with familiar faces. While the layout was almost the same as it was in the summer, more people this time meant more crowding but thankfully not enough to produce any serious human traffic jams.

Our first panel featured an artist duo – Erica Andreen and Melissa McCommon – preaching the gospel of glorious copic markers (made in Japan), which are double-tipped and are refillable with permanent, non-toxic alcohol based ink. The brush tips, or nibs, are replaceable as well, ensuring very high quality albeit at a corresponding price tag. That didn’t stop both from pulling out about literally a thousand copic markers of various types and all sorts of varied hues of all colors, and even gave away two basic sets of markers as raffle prizes. Unfortunately their PowerPoint file was unable to be viewed via projector because it needed a VGA connector (on this page its proper name is an HD15). If you are an aspiring artist, please do your homework first (since it would be a grave disservice to both artists to post technical knowledge based on hurriedly written notes) and remember that safety is priority!

Once again, the activity to end the day was the AMV contest. The action category had the most entries by far, however competition in the Comedy and Drama combined category was no contest. A particular entry had heavily depressing scenes from various anime set to an equally sad song, cue the explosion of feels from just about everyone involved. Afterwards Zetsuna stayed behind to help tally the votes and a separate blogpost of his can be read here.

Day 2: Saturday, January 3, 2015
Saturday happened to start on the wrong foot. Amoirsp ended up missing Podcasting 101 because of rescheduling to a different time slot (which meant a time conflict for us) and Zetsuna happened to be there for the “Gen Urobuchi: Feminism for Men?” panel only to have it canceled via no-show. These things happen and definitely aren’t the fault of convention staff.

Since we had some time before our scheduled press interviews over in the Sheraton Grand Hotel, we decided to stop by the anime viewing room nearby. The usual idea was to show the beginning of scheduled anime series with the Crunchyroll subtitling, which is definitely good for getting people exposed to anime they wouldn’t have ordinarily seen otherwise. (A gentleman in an Akatsuki cloak and holding a Tensa Zangetsu replica expressed interest in watching the rest of Denki-gai no Honya-san, known for its off-color slapstick comedy.) In between episodes, the person in charge of the viewing room showed other Western animation and CollegeHumor-type material. Some of that was a little questionable for all-ages, perhaps because of heavy satire.

After that we had our interviews with Yaya Han, Peter Cullen and the Sailor Moon voice actors. We asked Yaya Han, a professional cosplayer and costume designer, about whether there’s an age limitation for cosplaying, and she answered that age shouldn’t be an issue. Other questions she was asked revolved around the stigma with cosplay and current event issues.

We asked Peter Cullen, the voice of both the original 1980s Optimus Prime and Eeyore from Winnie the Pooh, about the reality of working as a VA in 1984 vs now. While the technology has advanced quite a lot, there’s less direct people interaction since back then recordings were done with everyone in the same physical location. Nowadays, people need not be in the same place, but instead can record and upload via the internet. He particularly got nostalgic about working with Frank Welker, who was the original voice of Megatron.

The Sailor Moon VAs’ overall favorite season was the first one. At the time, anime was a new concept and they did not expect it to be THAT popular. They recounted a story of a 90s convention where one girl cosplayed as Sailor Mercury and she attracted the attention of all the attendees as if she was a magical superstar since cosplay (as we now know it) wasn’t really popular then. For personal favorite seasons, Sailor Moon S stood out since it had a good plot line, good use of outer scouts, and good characterization.

We asked about the reality of working as a VA after noticing that both Peter Cullen and the Sailor Moon VAs experienced sudden breaks in their career. This was due to either the non usage of the character or a break in dubbing rights.

Finally Chris and David Wadley, along with guests, friends and family celebrated both their birthdays in the Press Room to close out Saturday.

Day 3: Sunday, January 4, 2015
Oddly enough, we at Neko’s Shiritori were most looking forward to the panels on Sunday.

Fabrickind’s panels, “How to Level Up Your Cosplay” and “Fabric Choice for Cosplay” were highly technical and delved into impeccably detailed information regarding their subject matter. She had a co-panelist for the former panel, which was also beset by the VGA connection issue – thankfully a member of the audience had the right connector for them to use. Additionally, Fabrickind has them posted on her Tumblr, where she also does cosplay help and guidance for a character you’ve set your eyes on cosplaying. Among the tips for proper cosplay was the issue of makeup – yes, even males should have a layer of foundation on, which corrects for natural skin function at conventions combined with flash and/or layman camera quality.

Another panel which we attended was “Ask a Puella Magi” which was hosted by cosplayers, and it was fun seeing them project each character’s quirks. The girls were asked questions such as “if you were to use one of the other girls’ weapons, whose would it be?” Mami or Homura’s guns was the unanimous answer – nobody wanted swords, bows, or spears. Kyubey was asked for some questionable contracts, so wrong that nobody even heard what it actually was as it was whispered. Another question was about favorite food. Mami likes cupcakes.

The main focus of Trina Nishimura’s interview was regarding her large variety of roles. There’s a huge similarity in that roles she plays are honorable characters, so Steins;Gate’s Kurisu Makise was her favorite of all because of her character.

Finally, the Closing Ceremonies! A bit of candid talk about the convention took place, and it’s always reassuring to see the staff and their high exuberance for delivering the best convention possible and willingness to hear any sort of feedback from the attendees to do just that. After entertaining some questions from the audience, they announced the plan of expanding the artist alley/dealer’s hall to include the room directly adjacent while serving autograph tables and their queues along a wall. By doing this, more artists and dealers are able to attend while keeping the autograph queues inside and not out in the sweltering heat/frosty cold as mentioned earlier in this post. Furthermore, SacAnime will have access to the theater behind the convention center next time for celebrity Q&A, Cosplay Masquerade, and such. Those are highly intriguing developments and we’ll be happy to cover them.

Overall Impressions
SacAnime may not be the most famous convention out there, but that doesn’t diminish its mission in the slightest. The convention center was also able to accommodate the increased wintertime turnout. The staff’s commitment to meeting attendees’ needs and the community, from normal conventioneer to visiting celebrity, is truly a pleasure to behold. The panelists are completely passionate in what they do, and the random acts of hilarity from people in-costume while walking from location to location are a nice touch to an already great convention experience. We definitely weren’t disappointed this time either.

One thought on “SacAnime Winter 2015 Review”